Susan Hill Long is in the House!

It's a book birthday!! 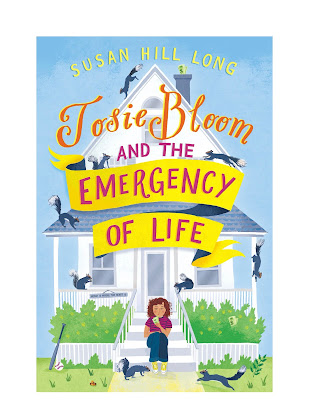 I'm thrilled to have my pal, Susan Hill Long, stop by to talk to
us about her new middle grade novel, JOSIE BLOOM AND THE EMERGENCY OF LIFE, which Kirkus calls "entertaining and emotionally resonant.

Publishers Weekly said, "Long nails the voice of a kid trying as hard as she can to tackle adult problems on her own when the adults in her life fall short."

What's the story about?

Josie Bloom discovers the first wad of money stuffed inside a packet of bologna, and the second hidden between the trash can and the bin liner. That money comes in handy when she finds the PAST DUE  notice from the heating company.

Seems like Grandpa has been spending more time feeding squirrels than paying the bills. But when a bill arrives that's too big to handle, Josie's going to need a plan to get more money - while keeping Grandpa's odd behavior a secret.

And here's a link to the first page. I always open a book and read the first paragraph before I commit to pulling it from the bookshelf. Do you?

That's a terrific cover. What's with the squirrels in your books?

I love it, too. The art is by Sara Mulvanny. Thank you and ah, yes. There are squirrels on the cover of this new book and there was a squirrel on the cover of my last book, THE MAGIC MIRROR: Concerning a Lonely Princess, a Foundling Girl, a Scheming King and a Pickpocket Squirrel. [Note from O'Connor: I ADORE this book!!!]

Where I live, the squirrels are bigger than my dog. It's true my dog is small, but these are some big squirrels. I'm telling you. I don't even like squirrels.

Then why do you put them in your books?

Good question. They just appear. As in real life, Squirrels Are Everywhere. In the case of JOSIE BLOOM, Grandpa starts feeding the squirrels to an extreme degree, yet another item on his list of odd behaviors.

What is Stargardt Disease?

Stargardt is a disease of the eye. Josie's best friend, Winky, is losing his vision to it, and with that his ability to play baseball, the game of his heart. There is a lot of marvelous research being done using stem cells to cure this disease.

Thanks so much for stopping by, Susan! I love this book.

Thank you for having me! I'm excited to have his book out in the world. I hope your readers will enjoy JOSIE, and if they do, that they'll write me at my website, www.susanhilllong.com. (I will gladly write back!) 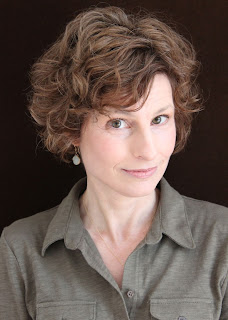 EMERGENCY OF LIFE, THE MAGIC MIRROR: CONCERNING A LONELY PRINCESS, A FOUNDLING GIRL, A SCHEMING KING, AND A PICKPOCKET SQUIRREL, and, WHISTLE IN THE DARK. Special recognition for her work includes a Publishers Weekly Best Book of the Year; Bank Street Best Books; Oregon Book Award and the Katherine Paterson Prize. She lives in Oregon with her husband, two daughters, and their dog, Pippin.

Posted by Barbara O'Connor at 12:25 PM No comments:

Bobbie Pyron is in the House!

Today I'm thrilled to have my friend, Bobbie Pyron, here to talk about her latest middle grade novel. 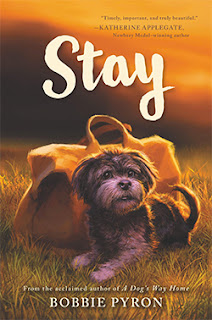 STAY is the intertwined stories of Piper and her family, and a little dog named Baby, and his person, Jewel. Piper’s family has fallen on hard times and have just moved into a shelter for families experiencing homelessness. Piper misses her home and friends back in Louisiana and hates being called “the homeless kid” in her new school. Baby and Jewel are also experiencing homelessness. They can’t live in a shelter, though, because shelters don’t allow dogs. And Jewel would never give up Baby! But when Jewel gets sick and is taken away from the city park where she and Baby live, Baby is left on his own. Piper is determined to do everything in her power to get Jewel and Baby back together.

One night after I’d started writing the first draft of STAY, I saw a story on the national news about a Girl Scout troop in Brooklyn, New York. All the girls in this troop live in a family shelter. Before they came to the shelter, some had lived with their families in cars, slept on relative’s couches, or lived in subway stations. Despite this, the girls were bursting with pride and enthusiasm! They were so strong, brave, and yet compassionate—just the way I wanted Piper to be.

3.     In all your books, geographical place plays an important role. In STAY, though, you never say where the story takes place. How come?

That’s very observant of you! The reason I didn’t ever say exactly where the book takes place is because I wanted the reader to feel like this could take place in any place, any city. Because that’s the way homelessness is: it can take place everywhere.

4.     Now that you’ve written six books, do you see a reoccurring theme in your stories?

I think I tend to write a good deal about loss and what makes a home, and how we define family. I experienced a great deal of loss at a young age (my father died in a car crash when I was seven), and we moved around a lot too. I think these early experiences in my childhood keep informing my stories. I probably always will, in some form or another.

5.     Half of STAY—the dog’s chapters—are written in free verse. What was that like?

It was fun! I love poetry and I love reading books written in verse, so I wanted to see if I could write that way. I like to challenge myself as an artist. I also feel like dogs probably think in free verse, don’t you?

6.     Since most of your books have adorable dogs on the cover, show us a picture of your adorable dog!

I’d love to! This is Sherlock, my 14-year-old rescued Shetland sheepdog. He’s my baby! 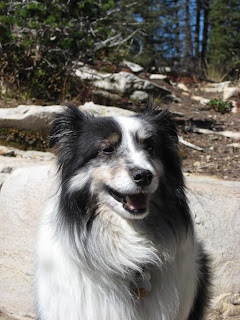 Thanks so much for stopping by, Bobbie! 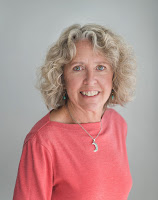 Bobbie Pyron is the author of the award-winning A DOG'S WAY HOME, the critically acclaimed THE DOGS OF WINTER, among other popular middle grade books. She lives in Mars Hill, NC, with her husband and incredibly sweet Shetland Sheepdog, Sherlock. To find out more about Bobbie and her books, visit her website at www.bobbiepyron.com

Posted by Barbara O'Connor at 5:00 AM No comments:

Jo Hackl is in the House!

Set in an overgrown Southern ghost town, Smack Dab in the Middle of Maybe takes readers on an adventure with 12-year-old Cricket, who sets out to survive on her own in the woods of an overgrown ghost town to try to solve a clue trail left by an eccentric artist, with a logic all his own, all 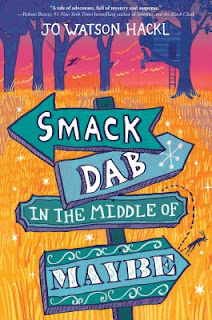 to try to find a secret room that may or may not exist. Cricket must use her wits and just a smidgen of luck to live off the land and solve the clues. With the help of a poetry-loving dog and the last resident of the ghost town, maybe, just maybe, she can do it.

Jo stopped by to answer some great questions. Enjoy!

What were your favorite books as a child?

How did you go about crafting Smack Dab?

I began the first draft in a class offered through Emrys, a local literary arts organization in Greenville, where I live. I attended writing workshops and read books about the craft of writing. I studied and wrote poetry. I wrote the first draft in five months and spent seven more years revising, refining and polishing. I completed at least nine full drafts. I was on at least the fourth draft and several years into the project before I started sending it out.

What kind of research did you do for the book?

I trained on everything from fire starting, shelter building and water gathering, to foraging for edible and medicinal plants. I camped out in the woods and recorded information about sights, sounds, and textures. I studied which edible foods are available during each part of the year. I researched the behavior and diet of woodland animals, the migration patterns of Southern birds. I reached out to entomologists and experts on human behavior and the natural world. I studied information about Leonardo DaVinci, Emily Dickinson, Walt Whitman, and used that all in constructing the clue trail.

What kind of a response to Smack Dab have you gotten from readers?

I love to hear from readers and I’ve been thrilled with their response to the book. One reader reported that she read the book 14 times. Many others have written to say how much reading about Cricket’s journey has helped them in their own. So far, half of the readers from whom I’ve heard have been students and half have been adults. The book has layers and it’s interesting to see what layers spoke the most to each reader.

What are you reading these days?

I read mostly middle grade and I have about five books going at once. I’m currently reading Shadows of the Lost Sun, the latest in the Map to Everywhere series by Carrie Ryan and John Parke Davis, The Law of Finders Keepers by Sheila Turnage, Serafina and the Seven Stars by Robert Beatty, Grenade by Alan Gratz, and re-reading When I Crossed No-Bob by Margaret McMullan.

What advice can you give to aspiring middle grade authors?

You can do it! Start an idea journal and use it write down ideas for things such as character names, quirks, details that help show character traits, and plot ideas. Give yourself permission to write a really bad first draft. The goal of the first draft is just to get your ideas down on paper. If you get stuck, leave a blank. You can always brainstorm with a friend and fill in the details later. Once you have your draft, you have something to work with. Go line by line and look for ways to make your work better. Try to imagine how each character would feel in each scene and give your readers details to make them feel as though they are right there in the scene with your characters. Make sure that each word is the best word and that each scene keeps the story moving. Cut any unnecessary words. Read your story aloud to make sure that the rhythm of the language feels right. Keep writing, looking for ways to make your work even better. Don’t be afraid to take risks. As my character Cricket would say, “sometimes it’s time to start taking chances on yourself.”

Thanks so much for stopping by, Jo!

Jo Watson Hackl was born in Biloxi, Mississippi, not far from Ocean Springs, where her favorite artist,
Walter Anderson, lived and once painted a secret room. When Jo was eleven, she moved to a real- 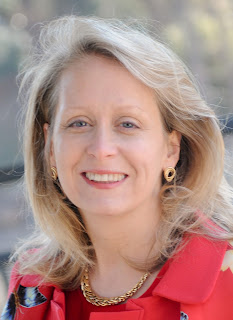 life ghost town, Electric Mills, Mississippi. Mr. Anderson’s secret room and the ghost town were Jo’s inspiration for this debut novel. She lives with her family in Greenville, South Carolina. You can find her online at JoHackl.com. Jo is also the Founder of Outdoorosity.org

Posted by Barbara O'Connor at 7:00 AM No comments: