Constance Lombardo is in the House!

Today I'm celebrating a fabulous new picture book by Constance Lombardo: EVERYBODY SAYS MEOW, hitting bookstore shelves on November 5!
And what a treat that Constance stopped by to answer some questions! 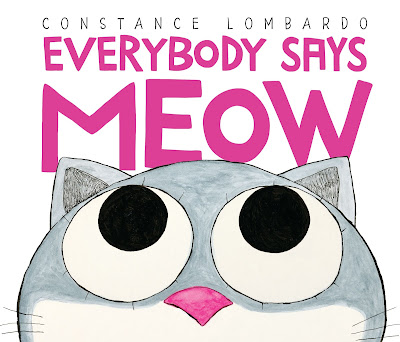 How does it feel to have your debut picture book coming out soon?
It feels as wonderful as being in a room full of puppies! And kittens, of course. And they’re not even fighting, it’s just one big love-fest.

Describe the story of Everybody Says Meow in ten words or less.
A kitten learns that everybody really does say ‘Meow’ – not!

Another book about cats, huh? Tell me about some of the cats in your life, past and present.
1.     Childhood cat: a tuxedo named Max, who once bit my mother’s toe because she wasn’t feeding him fast enough.
2.     A kitten found in a garden who was so small we had to feed him milk with a Q-tip. We named him Phantom.
3.     A roommate’s gorgeous long-haired barley-colored cat named… Barley. Would sit on the kitchen counter surveying his domain.
4.     A yoga studio cat named Peanut who would meow along with our Ohm.
5.     Myrtle, the sweetest cat ever. Very vocal, especially when I was about to feed her.
6.     Gandalf the Grey, aka, G. G., the mischievous grey tabby. As a kitten, he never said a peep. When I fed them, and Myrtle would MEOW like crazy, I’d say, “See, G.G., everybody says meow!” That was the seed of this book.

The illustrations for Everybody Says Meow were called “…simple but zestily cartoonish…” by The Bulletin for the Center for Children’s Books.  Did you use traditional media or digital?
First of all…yay!! I wanted the art to be playful, above all. I used a technical pen and watercolor washes – totally traditional media. But I’ve recently been learning Procreate, a digital art-making app. I love working in watercolor, pens, colored pencils, and markers. But I must admit that Procreate is super fun! 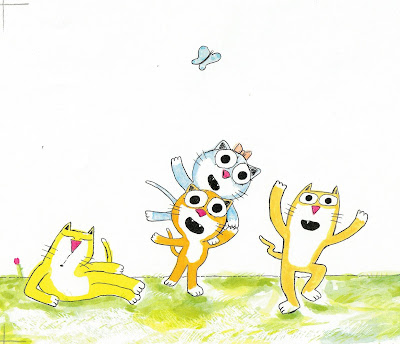 What are some of your favorite picture books?
Classic favorites include The Story of Ferdinand by Munro Leaf with amazing black & white art by Robert Lawson, Shrek by William Steig, and A Fierce Bad Rabbit by Beatrix Potter. Some contemporary books I adore are Interrupting Chicken and the Elephant of Surprise by David Ezra Stein, I am a Cat by Galia Bernstein, and Fox and Chick by Sergio Ruzzier.

There are some non-felines in Everybody Says Meow. Which animal was the most challenging to draw?
I found it surprisingly difficult to draw the duck. But once I put him in a purple top hat, it all made sense.

What about dogs? Do you even like dogs?
I LOVE dogs!!! My big news is I adopted a dog last year. He’s a 10 year old beagle named Louie. We love roaming around the neighborhood, while Louie smells all the things, and eats whatever he finds, even if it’s not exactly edible. I even did a cartoon about it using Procreate! 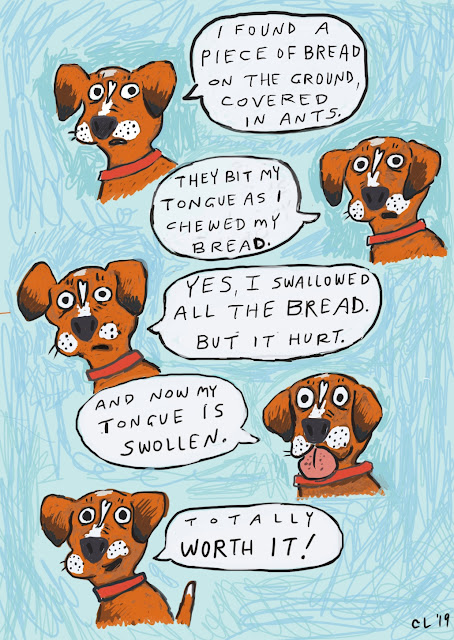 Thanks for stopping by, Constance!
Thanks for hosting me on your blog, Barbara O’Connor!

Constance Lombardo is the author/illustrator of the middle grade Mr. Puffball series (HarperCollins.) Her first picture book, Everybody Says Meow, publishes on November 5. She loves visiting classrooms and talking to kids about writing and drawing.
Posted by Barbara O'Connor at 5:00 AM No comments: