It's official! How to Steal a Dog is going to be made into a movie in Korea!

So, now, which dress should I wear to the premiere? 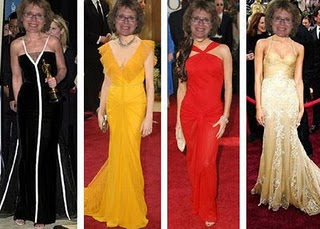 (You might have noticed that I always use the same photo. That's because it's too dang much trouble to use Photoshop and make a new one.)

Asian territory film rights to Barbara O'Connor's HOW TO STEAL A DOG, about a recently homeless young girl who plots to help her family move out of their car by collecting on a "Lost Dog" reward poster for a dog she will steal herself, to Hak Jun Kim (200 POUNDS BEAUTY, TAKE OFF) and Samgeori Pictures by Sean Daily at Hotchkiss and Associates on behalf of Barbara Markowitz at the Barbara Markowitz Literary Agency.
Posted by Barbara O'Connor at 6:00 AM

Email ThisBlogThis!Share to TwitterShare to FacebookShare to Pinterest
Labels: How to Steal a Dog, Movie

I say go with the black dress or the red one.

Congratulations on your cinematic debut and you simply must wear the red gown.