Lisa Graff is in the house!!

Today I have the pleasure of being joined by the uber funny, talented author Lisa Graff.

We're celebrating the publication of Lisa's hilarious new middle grade novel, Double Dog Dare. This book has Lisa Graff written all over it: funny, quirky, upbeat, and full of heart.

Want to win a free copy? Details following the interview below. 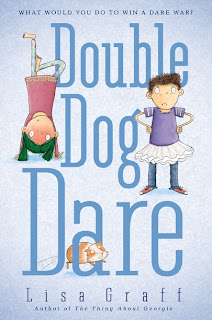 Lisa was here back in 2010 discussing her delightful Sophie Simon Solves Them All.

I raved about her amazing The Thing About Georgie back in 2007.

I had the pleasure of working with Lisa when she was an editor at Farrar, Straus & Giroux. We clicked from day one and have been clicking ever since.

So without further ado, let's get started.

Okay, Lisa, be honest now. You write so well about kids double dog daring one another to do crazy stunts. Which one of the dares below would you REALLY do?

I double dog dare you to sing a chapter of your book on the subway.

I double dog dare you to tap dance in Central Park with your underwear on your head.

I double dog dare you to do any one of the dares in Double Dog Dare and put it on YouTube.


Oh man, I am such a chicken when it comes to dares! (That’s why I just write about them.) But if I had to pick, I would probably go with the YouTube dare. I could do the one Kansas has to do in the book where he duck tapes an ice cube to the crook of his arm until it melts. It sounds painful and sort of awful, but if a fictional character can pull it off and still look cool, surely I can too, right???


I LOVED those pics you used to post on your blog of you doing beauty experiments. I double dog dare you to post some of those.


Ha, all right! (For those not in the know, several years ago I attempted to follow all of the beauty advice from six beauty magazines for six months. It was very weird and very exhausting, but I did get some good stories out of it.)


Here’s a photo of me just after I got my bangs cut. (This was the year of the Heidi Klum straight bangs phenomenon. They were all the rage.) I think this was a day I also had to wear “natural make-up” of some sort. Those were my favorite days, because my habit of showing up at my job with plum eye shadow and “cat-eyes” liner was starting to make everyone I worked with think I was insane.

This second photo is just after I dyed my hair black for the experiment. I had never dyed my hair before, and I was SO. FREAKED. OUT. ABOUT. IT. It turned out less terrible than I’d feared, but it’s certainly not my best look. Bordering on goth. Luckily the “cotton candy pink” lipstick and the fake eyelashes I’m sporting let you know right away I’m not a vampire.


Last time you stopped by the blog, you told a fantastic story about a money jump you participated in when you were in middle school. Care to share it with my new readers?


Sure! I love retelling my most mortifying moments. :)


Well, when I was a kid, Big Bear Middle School would hold an assembly at the end of every semester, and as part of this assembly, the names of all the kids who’d received straight-A’s on his or her most recent report card were put into a hat. Whichever student had his name drawn from the hat got to climb down from the bleachers and participate in a “money jump,” in which he would—in theory—leap across a long, taped-together strip of dollar bills. However far you jumped, that was how much money you got. I can only imagine that the school administration thought that this whole event would be a middle-school kid’s dream. Getting paid for good grades! Who wouldn’t want to earn all A’s?

What our teachers failed to put together, of course, was that the kids who usually got straight-A’s were the exact kids who did not want to show off their long-jumping skills in front of the entire student population at an assembly. The worst part of it all was that after your jump, Mrs. Rouse, the language arts teacher, would make a HUGE SHOW of counting out the money you’d earned. “Twenty-three! Twenty-four!” Everyone in the auditorium would count along as she slapped the bills into your hand. So not only did the whole student body have proof about what a nerd you were, they knew exactly how much money they could steal from you later. As a straight-A student and a nerdtasticly terrible long-jumper, those moments right before they pulled the name out of the hat were the most terrifying of my middle-school career.


So, of course, on the last day of seventh-grade (my gangliest, ugliest, least put-together year ever) my name was pulled out of the stupid hat. I’m pretty sure I tried to melt to the bottom of the earth, but I was pushed down the steps of the bleachers by my extremely-helpful classmates. And it was even more horrible than I’d imagined it would be. Because I did not just jump badly, like I had all those times in gym class. Oh, no. I actually FELL OVER, flat on my awkward butt. Mrs. Rouse helped me to my feet (nightmare, nightmare), and then she led the entire school in loudly counting out my winnings. “Three! Four!” That was it. I earned four whole dollars. It was . . . character-building.


If you had to have another job, what would it be?


I’d want to be the host of a funny science show for kids, like Bill Nye the Science Guy. (Lisa Graff the Science . . . Raft? I’m still working on the name.)


What are some of your favorite non-book-related activities?

I love to bake. Cookies, cakes, tarts, everything. Once when I was an editor at FSG I convinced the entire company to participate in a “pie festival,” where anyone who wanted to brought in a pie, and we all spent an entire lunch hour stuffing our faces. I’m pretty sure everyone I worked with thought I was nuts, but it sure was tasty!


What’s next for you?


I have a very silly sci-fi YA book coming out this July. It’s called MOTHERSHIP, and I co-wrote it under the pen name Isla Neal. It’s my first young adult novel, and the first of a trilogy.

I also just finished up copyedits on a new middle-grade novel, A TANGLE OF KNOTS, which comes out in Spring 2013. That’s a bit of a departure for me, too, since it’s the first book I’ve ever written with magic in it. And there are cake recipes sprinkled all throughout the book, so I finally got to put my baking skills to good use!


Thanks so much for having me, Barbara! I always love to stop by. :)

Philomel is giving away a copy of Double Dog Dare to one blog reader. All you need to do to enter is to email Lisa at graff [dot] lisa [at] yahoo [dot] com with the subject line “GREETINGS FROM NOWHERE.” The winner will be chosen at random on May 1st.

And you HAVE to check out this awesome contest for kids to build their own Rube Goldberg machine - with super prizes!

Posted by Barbara O'Connor at 5:30 AM

You girls are great!

Enjoyed the interview. The video about the Rube Goldberg machine contest sounds like fun. I hope a lot of kids decide to participate.

Susanne
PUTTING WORDS DOWN ON PAPER